There are NO TICKETS for this concert. Admission is by DONATION on the night

The Thorne Trio is an established wind group formed in 1999, comprising graduates of the Royal College of Music. In their time together they have achieved success with a varied and wide range of experiences. During their time together, The Thorne Trio was accepted onto The Blackheath Halls Young Artists Scheme, where they gave a series of recitals and education workshops and were also winners of both the Philharmonia Orchestra/Martin Music Trust Scholarship Fund Education and Outreach Award and of the Anglo-CzechSlovak Music Competition. As a result of the latter, they travelled to Prague where they gave a recital in Martinu Hall at the Liechtenstein Palace. During 2004/06 they held the post of Junior Fellows of the Royal College of Music, and more recently, were semi-finalists in the prestigious Zinetti International Chamber Music Competition in Italy.

In addition to a busy recital schedule, they are also dedicated to their education and community work. They have worked for the Yehudi Menuhin Scheme, Live Music Now!, Wigmore Hall Community and Education Department, The Council for Music in Hospitals, Cavatina Chamber Music Trust, Philharmonia Orchestra, Royal Albert Hall, Royal Welsh College of Music and Drama giving demonstrations, workshops and concerts to people of all ages throughout the United Kingdom.

The trio’s commitment to both their recital and education work, inspired them to commission a work by the British composer Cecilia McDowall, that would appeal to the audiences in both areas of their work. ‘Century Dances’ was premiered at St George’s, Brandon Hill in 2005 and has been used in the trio’s workshops and concerts ever since, all over the country.

To read further details about the group, including individual biographies, and to listen to samples of their playing please visit their website 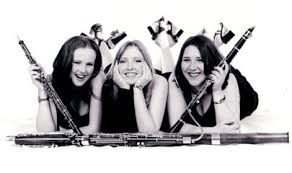