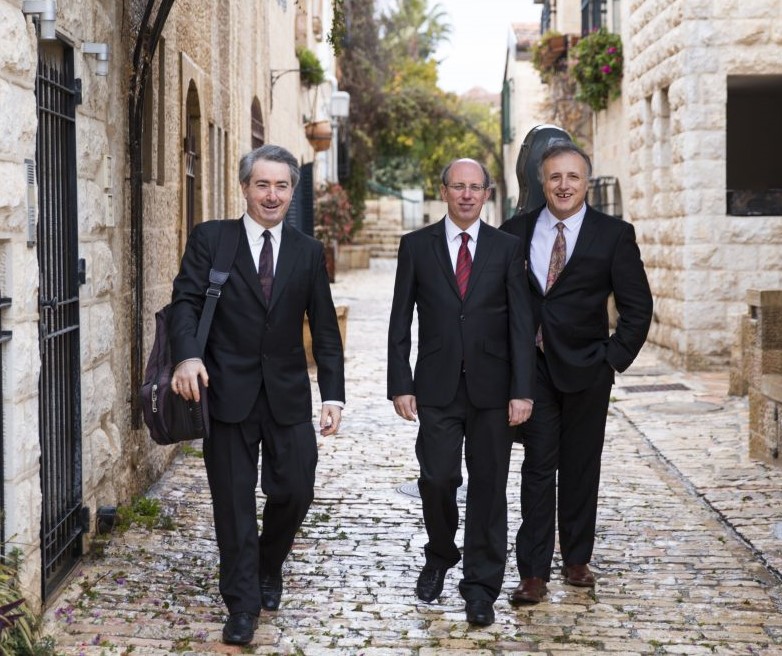 As a soloist, violinist Hagai Shaham has performed with the world’s leading orchestras, including the English Chamber Orchestra, Royal Philharmonic Orchestra, Royal Liverpool Philharmonic, BBC Philharmonic, Belgian National Orchestra, Israel Philharmonic, Sao Paulo Symphony, American Symphony (at Carnegie Hall), SWF Symphony, BBC Scottish, RTE Symphony Orchestra and the Taipei, Singapore and Shanghai orchestras.  In September 1990, Hagai Shaham and his duo partner, Arnon Erez, won the first prize at the ARD International Music operation in Munich in the Violin-Piano duo category leading to highly acclaimed recitals throughout the world and a duo partnership which continues to this day. He has eleven recordings for Hyperion alongside further discs for Chandos, EMI and Naxos.

Born in 1965, Arnon Erez is one of Israel’s leading pianists and an outstanding chamber musician.  He has won several international competitions, including first prize at the Francois Shapira competition and has performed in major festivals and concert halls around the world, including Carnegie Hall, New York; Beethoven Halle, Bonn; Alte Oper, Frankfurt; Herkulessall, Munich; Musikverein, Vienna; the New Auditorium du Louvre in Paris; and London’s Wigmore Hall.  As a soloist he has performed with many orchestras including the Israel Philharmonic Orchestra, the SWF Symphony Orchestra, the Haifa Symphony Orchestra and the Banff Festival Orchestra.  He has given many recitals and recorded for radio and television in Germany, Austria, Holland, Israel, Turkey, Mexico and France.

Cellist Raphael Wallfisch was born in London into a family of distinguished musicians, his mother the cellist Anita Lasker-Wallfisch and his father the pianist Peter Wallfisch.  At the age of twenty-four he won the Gaspar Cassado International Cello Competition in Florence.  Since then he has enjoyed a worldwide career playing with the world’s greatest orchestras including London Symphony Orchestra, London Philharmonic Orchestra, Philharmonia, BBC Symphony, Halle, City of Birmingham Symphony Orchestra, Leipzig Gewandhaus, Berlin Symphony, Los Angeles Philharmonic, Indianoplis Symphony, Warsaw Philharmonic, Czech Philharmonic and many others.  He is regularly invited to play at major festivals such as the BBC Proms, Edinburgh, Aldeburgh, Spoleto, Prades, Oslo and Schleswig Holstein. With a discography of over 70 discs on EMI, Chandos, Black Box, ASV, Naxos and Nimbus Raphael Wallfisch is one of the most recorded classical artists in the world.