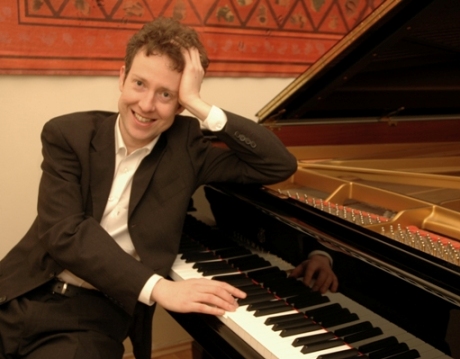 Sam Haywood has performed to high critical acclaim all over the world as concerto soloist, recitalist and chamber musician. Sam began playing the piano at the age of six, inspired by evenings listening to crackly LPs of Beethoven sonatas with his Grandmother in the Lake District. His early teachers David Bonser and David Hartigan continued to inspire him and by the age of thirteen he had won 2nd prize in the BBC Young Musician of the Year competition. The Royal Philharmonic Society then awarded him their prestigious Isserlis Award, after which he moved to Vienna to study with Paul Badura-Skoda. His next major influence was study under the Italian Schnabel-pupil Maria Curcio.

He has given several recitals on Chopin’s own Pleyel piano of 1848 and also on fortepianos, including a recital at London’s South Bank Centre on both modern and period instruments. He is also keen to perform lesser-known works. Rosetti (Rosetti Festival, Germany) Elgar (the composer’s own piano version of then Enigma Variations at the Wigmore Hall and Schleswig-Holstein Festival), Mozart’s younger son Franz Xaver (British Embassy, Vienna) and John McLeod (piano sonata commissioned and premiered by Sam Haywood at the Scottish Sound Festival) have recently featured in his programmes. He has also edited a new edition of piano works by Julius Isserlis and Carl Fruehling’s Clarinet Trio. He regularly partners cellist Steven Isserlis and next season will be touring Europe and the United States with violinist Joshua Bell. His next recording will be a Chopin disc, recorded on the composer’s own Pleyel piano.