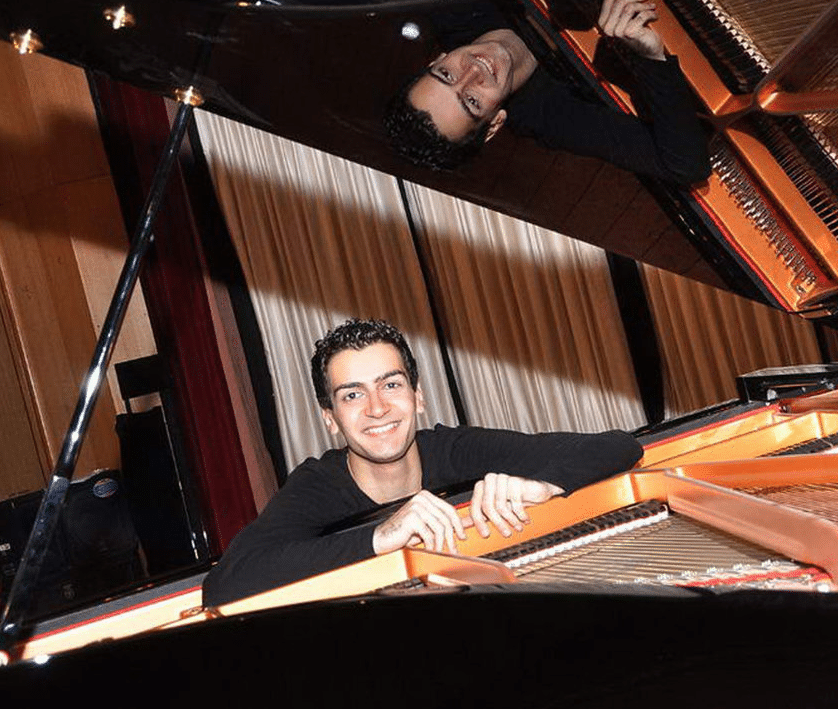 Brahms ~ Variations on a Theme
by Paganini, Op.35, Book 1

Riyad Nicolas Syrian British Pianist, was born in Aleppo, Syria, in 1989, and has already established himself as a leading figure of his generation on the international performing circuit. He has been complimented by such musicians as Daniel Barenboim, Vladimir Ashkenazy and John Lill.

Riyad has given solo recitals in many prestigious venues in London, including Royal Albert Hall, Cadogan Hall, Wigmore Hall, Barbican, St. Martin-in-the-Fields,St.James’s Piccadilly, and Leighton House. Concert performances have also taken him to USA including a debut at the Kennecy Center in Washington and Chicago Cultural Center (Dame Myra Hess series), Yehudi Menhin Forum in Switzerland and other concerts in France, Spain, Germany, the Gulf, Lebanon and Syria.

At the UK is regularly invited to give recitals hosted by the Beethoven Piano Society of Europe and the Chopin Society UK, and performed extensively for over 50 music societies at the UK. He has also been invited to perform in numerous UK musical festivals such as Harrogate, Norfolk-Norwich, King’s Lynn, Brighton, Devon, Darlington, Stratford-upon-Avon, Lincoln, Crediton, and Eastbourne.

Besides solo performances, Riyad is also a keen chamber music player, and has performed regularly in duos with violin and flute, collaborating with artists including the eminent flautist Wissam Boustany.

Riyad first came to London in 2005 when he was awarded a two-year scholarship to study at the Purcell School of Music with Sulamita Aronovsky, continuing to work with her at the Royal Academy of Music, where he graduated in 2011. In June 2015, Riyad graduated with a distinction in a Master of Performance course at the Royal College of Music, studying with Dmitri Alexeev and Vanessa Latarche, when he won the Gold Medal at the prestigious Chappell Piano Competition. Riyad also teaches piano at the Junior Department of Guildhall School of Music, Finchley Music School and Beethoven Music School

Through music Riyad has been promoting peace and raising awareness for the plights of the Syrian people and performing for many organizations such as UNHCR, the International Rescue Committee, the Arab British Centre, Said and Asfari Foundation.