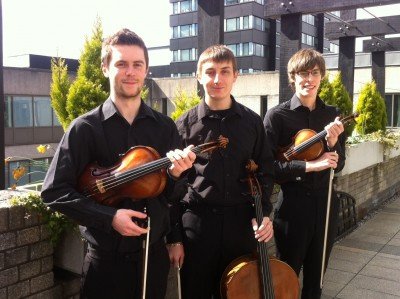 The Pether String Trio formed in September 2012 and has received tuition from Levon Chilingirian, Petr Prause and Peter Cropper. In March 2013 the trio won the RNCM Hirsch Prize with its performance of Beethoven’s Op.3 and in the same year they were also finalists for the Weil Prize. They have performed Mozart’s Divertimento in the Spotlight series at RNCM as well as in Hawkshead Parish Church as part of the 2013 Lake District Summer Music Festival. Since forming the Pether Trio the ensemble has had the opportunity to join with other musicians to  perform larger works, including Dvořák’s String Quintet with violinist Pavel Fischer and the Mozart Oboe Quartet with Tom Owen, principal oboist of the Gurzenich Orchestra, Cologne.

In January 2014, they performed Dmitry Sitkovetsky’s string trio arrangement of the Bach Goldberg Variations in Manchester Cathedral as part of the RNCM Chamber Music Festival 2014. The Trio was a major feature of the week-long ‘Mendelssohn on Mull’ festival in July 2014, with other recent appearances at the Lake District Summer Music, Deal and Alfriston festivals. For three consecutive years the Pether trio have performed at the RNCM chamber music festival playing a wide range of repertoire including Bach’s Goldberg Variations.

“The robust playing of the young Pether Trio articulated Bach’s Goldberg variations in a refreshingly new way in Sitkovetsky’s transcription… so this was a special opportunity, an explication of a familiar text in performance that was absolutely informative and affecting …” A Peppiatt