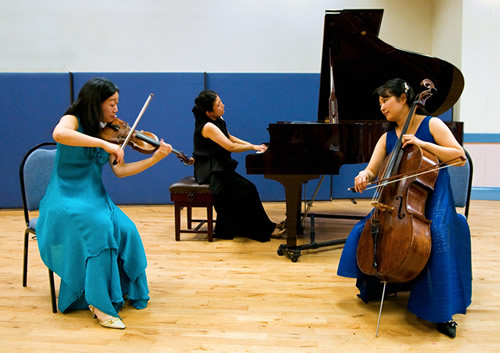 The Fujita sisters are daughters of a Japanese diplomat; Arisa and Honoka were born in Japan while Megumi was born in New Zealand. They have been playing chamber music together since early childhood.

Arisa studied with David Takeno at the Guildhall School of Music, Honoka studied at the Guildhall School with Jennifer Ward Clarke and Raphael Wallfisch. Megumi started to study piano at the age of five in Japan. She then studied in both Atlanta, USA and Baghdad, Iraq before joining the Yehudi Menuhin School in the UK where she studied with  Louis Kentner, Simon Nicholls and Vlado Perlemuter before continuing her studies at the Royal College of Music with Irina Zaritskaya.

The Trio received coaching from the Takacs Quartet at the Guildhall and won the Chamber Music Prize there in 1994.

They made a highly acclaimed debut at the Wigmore Hall in March 1999. “tour de force in all respects.” Musical Opinion.

Concert engagements have taken the Trio to more than 100 venues in the UK. Overseas, they have played in Canada, France, Italy, Ireland, Romania, Egypt, Morocco and Turkey, and they have won numerous awards and prizes, both as a Trio and individually.

The sisters last played for us in March 2010, when composer Arhur Butterworth was present to hear them play his Piano Trio No.2 (composed 2004). Sadly, Arthur died just 11 months ago in November 2014. On that occasion they delighted us by playing all the other items in their programme without music, resulting in a freer but more integrated performance. We look forward to this again.