This is our Annual Christmas Concert

at which mince pies and a mulled drink will be served 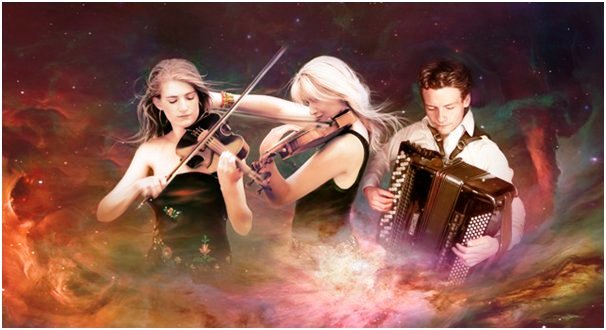 Harriet Mackenzie is an internationally renowned concerto soloist and recitalist and has performed across five continents. A multi-faceted virtuoso, she performs music from Baroque to the 21st century, the strictly Classical to Gypsy, Klezmer, Argentinian, Balkan and Japanese music. She is at home improvising in these diverse styles and also enjoys composing and arranging.

For Meg Hamilton, Kosmos bridges the western and non-western music worlds, while providing opportunities for viola playing, daring creativity, group composing, cross-genre arranging, and in particular freedom either to use or abandon rules and labels. In 2003, having gained an Honours degree in music at Edinburgh University and a performance diploma at Trinity college of Music, she won a Millennium Award from the Jewish Music Institute which facilitated an intensive study of klezmer music. Thus began her on-going fascination with music from Eastern Europe, the Balkans, Turkey, Greece, the Middle East and beyond. That same year she joined and has since co-lead She’koyokh on violin, a group now hailed as the UK’s “ best klezmer and Balkan band” (Songlines magazine). She’Koyokh has showcased Meg throughout UK and Europe at stages such as Amsterdam’s Concertgebouw, Aldeburgh’s Snape proms, and WOMAD festival.

Serbian born accordionist Miloš Milivojević is a first prize winner at International Competitions in Germany, France, Italy and Denmark. In Serbia he studied with Vojin Vasovic and with Owen Murray at the Royal Academy of Music where he graduated and was awarded with Dip RAM. In 2007 he became the first accordionist ever to win the RAM Club Prize at the Academy and in the 2008 was the Winner of the prestigious Derek Butler London Prize at the Wigmore Hall.

Twice winners of ‘Selected Artists’ for Making Music Concert Promoters Network, Kosmos is re-defining the relationship between classical and world music. Described by Richard Morrison of The Times, as having: “telepathic rapport, dazzling virtuosity, serious scholarship, intellectual curiosity and impeccable musicianship”, the group is united by a shared passion for improvisation, music from around the globe as well as the rigours of classical training.

Harriet, Meg and Miloš are soloists in their own right;  Harriet is an international chamber musician and concerto soloist with a particular interest in contemporary music; Meg is a unique viola player specialising in world and folk music styles including Celtic, Romanian, Greek and Middle-Eastern music; Milos is an international competition winner on the classical accordion with a passion for tango and Balkan music. Together they have crafted a unique programme inspired by music from all around the globe. They have each travelled extensively, performing with and learning from musicians from all over the world, as well as within the broad multiculturalism of London’s music scene. They have collectively studied music from North Africa, the Middle East, Turkey, Russia, Hungary, Serbia, Romanian Jewish and Gypsy music, Greek Rembetika, Island (Nissiotika) music, Argentine tango, Brazilian samba, flamenco, Celtic and jazz traditions as well as contemporary classical music. They combine all their knowledge with a respect for their own Western classical music training, performing freely with panache, innovation and creativity, incorporating improvisation into their own unique arrangements and compositions.

Harriet, Meg and Milos have crafted a programme unique to Kosmos, inspired by music from all around the globe. Wild Gypsy fiddling, emotive Jewish and Greek music glide seamlessly into hot-blooded tango, alongside interpretations of Japanese, Polish and Sephardic songs, new arrangements by and for the ensemble, and with references to classical composers including Bach, Brahms and Sarasate.