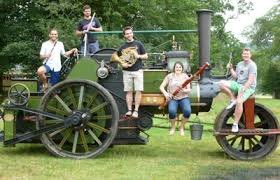 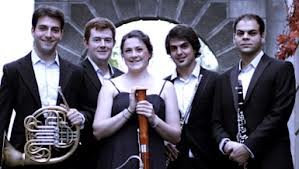 left to right on traction engine
.

Having met originally as Masters Scholars at the Royal College of Music the Cataleya Quintet was formed in 2011. Their international and diverse musical education from the UK, Europe and the USA produce a musical connection which creates an, unique and ambitiously driven wind quintet. The dedicated and focused ensemble have had coaching sessions from many of the professors at the Royal College of Music including tutors Simon Channing, Martin Gatt, Janet Hilton and Robin O’Neill, and have frequently performed within the Royal College of Music in a variety of public performances including showcases of Quintets by Francaix, and of Poulenc’s Sextet in RCM’s Britten Theatre. Cataleya have been invited to perform at the South Bank Centre and in the Elgar Room of the Royal Albert Hall, and have recently performed and been interviewed on Spanish National Radio (RNE). They have been awarded the Boconnoc Music Award from the Royal College of Music for July 2013 and Cataleya look forward to presenting their concerts as part of their residency at the Boconnoc Estate in Cornwall. More recently, The Cataleya Quintet has been invited to perform in the Purcell Room at the Southbank centre in January 2014 after successfully auditioning for the Park Lane Group Concert Series. As well as their many upcoming performances, the ensemble has plans to compete in national and international competitions, and continue their outreach and education work within schools and educational environments as the Cataleya Quintet.

To see and hear the quintet perform the second movement from György Ligetti’s Six Bagatelles for Wind Quintet click here.