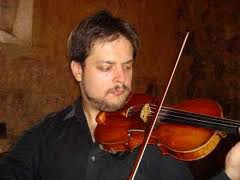 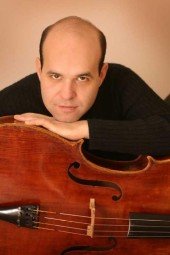 The Kandinsky Piano Trio was formed in 2002 and was soon selected to play at the Manchester Mid-Day Series at the Bridgewater Hall and for the making Music Concert Promoters’ Network Scheme both nationally and in the north west. They have since broadcast on BBC Radio 3 and performed all over the UK including King’s Place and the Conway Hall in the London Chamber Music Series. The trio last played for us in October 2004. Founder member Katya Apekisheva, who played on that occasion, has recently had a baby and is taking a break. We are extremely fortunate that she has been replaced on this occasion by the eminent pianist Tom Poster.  We have just learned that the other founder member, violinist Fenella Barton, will no longer be able to play for us on 12 December. She has kindly arranged for Russian virtuoso Yuri Zhislin to take her place.

Tom Poster was born in 1981, studied with Joan Havill at the Guildhall School of Music and Drama, where he held a Postgraduate Fellowship, and at King’s College, Cambridge, where he gained a Double First in Music. He is internationally recognised as a pianist of outstanding artistry and versatility, equally in demand as soloist and chamber musician across an unusually extensive repertoire. He has been described as “a marvel, [who] can play anything in any style” (The Herald), “an unparalleled sound-magician” (General-Anzeiger), a “young lion” (The Guardian), and as possessing “great authority and astounding virtuosity” (Est Républicain). He won First Prize at the Scottish International Piano Competition 2007, the Ensemble Prize at the Honens International Piano Competition 2009, and the keyboard sections of the Royal Over-Seas League and BBC Young Musician of the Year Competitions in 2000. In January 2012, Tom stepped in at three days’ notice to give two performances of Brahms’ Second Concerto with the Scottish Chamber Orchestra under Robin Ticciati. Since his London concerto debut at the age of 13, Tom has appeared in a wide-ranging concerto repertoire of over 30 major works ranging from Bach to Ligeti, with orchestras and conductors including the Aurora Orchestra/Nicholas Collon, BBC Philharmonic/Yan Pascal Tortelier, BBC Scottish Symphony/James Loughran, European Union Chamber Orchestra, Southbank Sinfonia/Vladimir Ashkenazy, China National Symphony/En Shao in Beijing, Atlantic Classical Orchestra/Stewart Robertson in Florida, and the State Capella Philharmonic in St Petersburg.

Tom features regularly on BBC Radio 3 as soloist and chamber musician, and appeared in both capacities at the BBC Proms in 2008, 2009 and 2011. He has given solo recitals at the Barbican Hall, the Brighton, City of London, Edinburgh, Presteigne and Spoleto Festivals, and in Canada, the Channel Islands, France, Germany and Switzerland. Tom enjoys duo partnerships with Alison Balsom, Guy Johnston and Jennifer Pike, has recently collaborated with Ian Bostridge in Aldeburgh and Steven Isserlis at the Wigmore Hall, and has performed piano quintets with the Brodsky, Elias, Endellion, Medici, Sacconi and Skampa Quartets. As pianist of the Aronowitz Ensemble (BBC New Generation Artists 2006-2008), he has appeared at the Concertgebouw Amsterdam, Laeiszhalle Hamburg, the Aldeburgh, Bath and Cheltenham Festivals, and on several occasions at the Wigmore Hall. Alongside his busy pianistic career, Tom has presented programmes on Beethoven and Schumann for BBC Radio Scotland, given lecture-recitals at the Two Moors Festival, acted as Artistic Director of Chacombe Music Festival, and appeared as Reciter in Walton’s Façade at Musicfest Aberystwyth. Tom’s arrangements of Gershwin and Cole Porter songs have been recorded and performed extensively, as have his compositions, including two chamber operas written when he was twelve. Recent commissions include a one-act musical for puppets, The Oldest Man in the World, for his brother Tobi’s theatre company, Wattle and Daub; and a piece about unusual sea-creatures, Turn to the Watery World!, for Alison Balsom, which toured the UK and Germany in 2010 and receives its London premiere in 2012.

Yuri Zhislin. Described by The Strad as a ‘Virtuoso with a truly Romantic temperament’, Yuri Zhislin is one of the most versatile musicians of his generation. Equally at home on both violin and viola, Zhislin enjoys an active and illustrious career as a soloist and chamber musician, performing in his native Russia, as well as Eastern and Western Europe, the United States, South America, Japan, Australia and New Zealand. His performances have taken him to nearly 60 countries around the globe.

Acknowledged by critics for his easily recognasible, distinct and warm tone, Zhislin collaborated with Maria Joao Pires, Dmitry Sitkovetsky, Natalie Clein, Levon Chilingirian and Michael Collins among many others. Winner of the ‘BBC Radio Two Young Musician of the Year’ in 1993, Yuri studied at the Royal College of Music in London and has performed in major concert venues across Europe, including the Wigmore Hall, Queen Elizabeth Hall and Kings Place in London, Het Concertgebouw in Amsterdam, Salle Cortot and Salle Gaveau in Paris, Stadcasino in Basel and Kolarac in Belgrade. Zhislin recorded his debut recital CD with a brilliant Greek pianist George Lazaridis in 2005 for the SOMM label, which received rave reviews in the media.

Together with his wife, an outstanding Russian violinist Natalia Lomeiko, Yuri toured the UK, Japan, Australia and New Zealand and recorded a critically acclaimed CD for Naxos in 2009. Lomeiko and Zhislin were invited to perform the Mozart Sinfonia Concertante for two consecutive seasons in Brisbane, Australia, as part of the Master Concert Series. In 2004, Yuri formed the Russian Virtuosi of Europe – a highly versatile and vibrant chamber orchestra that brings together some of the best string players from Eastern Europe that are now based in London. The Virtuosi performed in London, Paris and Zurich, toured South America and took part in numerous festivals throughout Europe. Future plans include concerts in Russia, a return South America tour and several concerts at major London venues.

Zhislin was an Artistic Director of the Evaristo Valle Festival in Spain between 2000 – 2005. Yuri is a professor of violin and viola at the Royal College of Music and is in high demand as a visiting professor giving master classes in Conservatorio de Liceo in Barcelona and Classes Magistrales in Leon, Spain, Malmo Academy in Sweden, as well as in Bulgaria, Holland, Japan and Australia.Zhislin has been an Associate Concertmaster of the Oxford Philomusica since 2011.

Alexei Sarkissov was born in Moscow in 1974 and started music lessons at the age of five in the Gnessin Special Music School. In 1992 he continued his education in the Russian Academy of Music with Professor Vladimir Tonkha. He gave his first solo recital at the age of ten and following year performed his concerto debut. In 1995 Alexei won a scholarship to study at the Royal College of Music with Professor Alexander Boyarsky. Winning all the major college awards while studing there in 1997 he moved to The Guildhall School of Music and Drama to study with Professor Stefan Popov.

Since then, professional engagements have taken him all over Russia, former Soviet Union, Europe and as far as New Zealand. His musical talent was recognised by a string of awards including Grand Prix in “Citta Di Moncalieri” International Competition and 1st Prize at the “Dasinamov” Intenational Competition. Alexei has performed in presence of The Pope John Paul II in Vatican, The former President of Russia Boris Yeltsin in Moscow’s Kremlin and HRH Prince of Wales. He has recorded for Russian and Italian radio and numerously appeared on international radio and television. HIs recently recorded CD includes works by Schubert, Schumann, Francouer and Tchaikovsky.

Alexei currently resides in London and maintains a busy schedule of chamber music and solo performances. In 2004 Alexei became the member of “Il Quartetto Casorati” string quartet based in Turin, Italy. Since then they have won prestigious “Gina Rosso” Award and their current plans include intensive touring of Italy and Europe. Alexei is member of Kandinsky and Gnesin Piano Trios and Guest Principal Cellist with Amsterdam Sinfonietta. As a soloist, Alexei has given recitals both in the UK and internationally, working with pianists Katya Apekisheva, Oksana Sarkissova and Rafaelle Moretti. He has given concerto performances with the Minsk Philharmonic, Russian Academy of Music, Royal College of Music Symphony Orchestra and English Soloists. Alexei has also made a solo CD recording for Pavel Kondrashin with works by Schumann, Schubert, Tchaikovsky and Francouer. Recent festival performances include “Homecoming” (Russia), Cassado (France), Beaminster (UK), Australasian Cello Festival (New Zealand) and “Music Festival at Sea” with presenters Richard Baker (BBC) and John Brunning (Classic FM).