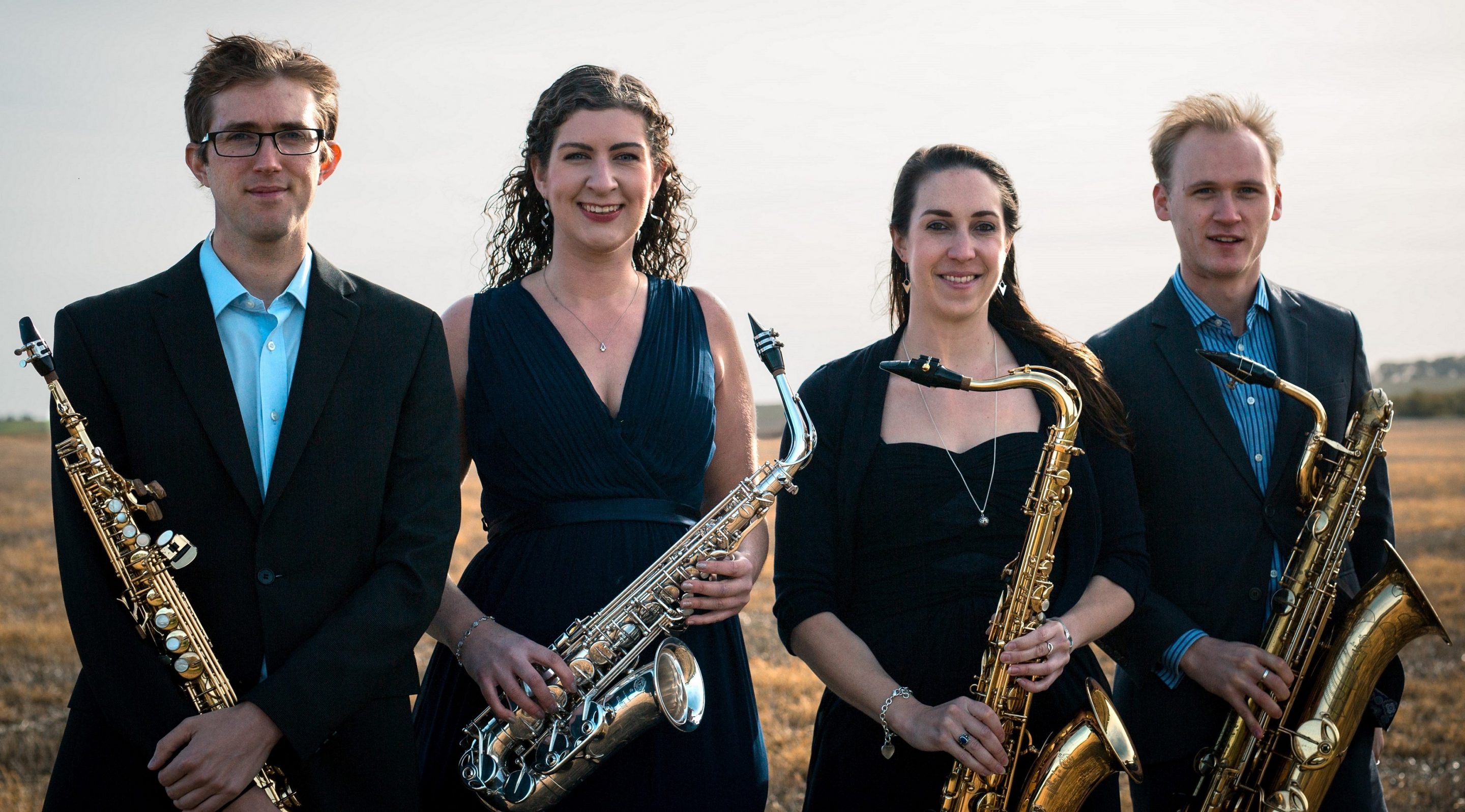 Please note that Parking is free after 6pm

on the nearby Railway View car park

There are NO tickets for this concert.

Admission is by DONATION

The Borealis Saxophone Quartet is an award-winning chamber ensemble based in Manchester.  The quartet formed in 2009 whilst all of the members were studying at the Royal Northern College of Music under the tutelage of Rob Buckland. During their time at the RNCM the quartet received coaching from chamber music specialists including Matt Hunt, Raaf Hekkema, Tim Reynish and Andy Scott and performed in public masterclasses with Johan van der Linden and Peter Cropper.

Having given their debut performance at Bridgewater Hall, the quartet has continued to give regular performances at prestigious venues including Kings Place and St John’s Smith Square.  In 2012 the quartet made their radio debut, performing Per Nørgård’s ‘Dansere om Jupiter’ as part of the BBC Proms festival, broadcast live on BBC Radio 3. As well as giving regular recitals the quartet has enjoyed much competition success. In 2013 the quartet won the Trevor Wye Memorial Prize, the inaugural Apollo Saxophone Quartet/RNCM Saxophone Ensemble Prize, the June Emerson Launchpad Prize and were named the Christopher Rowland RNCM Chamber Ensemble of the Year.  They were finalists in the 2012 RNCM Concerto Compeition, the 2014 Royal Overseas League Chamber Music Competition, and most recently have been selected as Young Artists for the Park Lane Group Concert Series 2014/15.

The Borealis Saxophone Quartet has a strong interest in contemporary music and enjoys building it’s own repertory.  The quartet has commissioned works from composers including Gary Carpenter, (“The North”, premiered as St John’s Smith Square and supported by the Clarinet and Saxophone Society of Great Britain), Tom Harrold (“Gentle Skies”, premiered at Kings Place Festival) and Lucy Pankhurst (“Borealis, Into Blue”, premiered at the RNCM).  The quartet has also collaborated with composers from the RNCM and the Northern Ballet School on a number of new works for saxophone quartet and dancers.  Most recently the quartet premiered four new works by RNCM composers as part of the RNCM Gold Medal Competition. In October, the quartet made its first international tour to Serbia, performing in Belgrade and surrounding areas as well as giving workshops and making appearances on national radio and television. The quartet’s debut album ‘The North‘, which solely features works commissioned or arranged by the quartet, was also released  in October and is now available for purchase.

Alastair Penman – Soprano Saxophone. Hailed as a “pioneering instrumentalist and writer” and praised for his “surpassingly beautiful music” and “undoubtedly brilliant mind”, saxophonist Alastair Penman is a dynamic and versatile performer and composer, presenting contemporary music in new and exciting ways. Having earned masters’ degrees in both Information and Computer Engineering (University of Cambridge) and Saxophone Performance (Royal Northern College of Music), Alastair has a strong interest in the fusion of live saxophone performance with electronic effects, backings, and enhancements to create often previously undiscovered sound-worlds. As a soloist, Alastair has performed at venues including Milton Court Concert Hall, St Martin-in-the-Fields, St James Piccadilly and The Forge. He has been a guest recitalist at both the RNCM and CCCU Saxophone Days, presenting music from his critically acclaimed album Electric Dawn. Alastair also performs with pianist Edward Liddall, presenting projects ranging from the traditional French saxophone repertoire through to showcasing contemporary British composers.  The duo are Park Lane Group Artists. Alastair’s talents have been recognised with awards from the City Music Foundation, RNCM, St Catharine’s College (Cambridge) and the Countess of Munster Musical Trust.  In addition, Alastair leads the Borealis Saxophone Quartet, who are Live Music Now and Park Lane Group Artists.

Gillian Blair – Alto saxophone. Gillian Blair is an award winning saxophonist from the Wirral. She has obtained Bachelors and Masters degrees from the RNCM under the tutelage of Rob Buckland and Carl Raven. She won the International Young Musician Competition at the Llangollen Eisteddfod, the D’Addario Single Reed Competition, the RNCM Woodwind Competition, and was a finalist in the prestigious RNCM Gold Medal and Concerto Competitions. She has performed around the UK at festivals and concert series’ including the BBC Proms, the World Saxophone Congress and several broadcasts for BBC Radio 3. Gillian is passionate about chamber music and performs regularly with Borealis Saxophone Quartet and the Polaris Duo. Previous performances include recitals at the Bridgewater Hall, St John’s Smith Square, St Martin-in-the-Fields and King’s Place. The quartet’s accolades include winning the RNCM Ensemble of the Year Competition and the Apollo Saxophone Quartet Prize. They reached the final of the Royal Overseas League Competition and have been selected as Park Lane Group and Live Music Now artists. Gillian has also performed with larger ensembles including the Orchestra of Opera North, European Union Youth Wind Orchestra, Piccadilly Symphony Orchestra, Commonwealth Youth Orchestra and the Soundscape Chamber Orchestra.

Victoria Puttock – Tenor Saxophone. Classical saxophonist Victoria Puttock recently graduated with distinction in a Masters of Performance degree from the Royal College of Music. During her final year she was the recipient of the Jane Melber saxophone prize. Victoria made her debut concerto in 2009 with Jacques Ibert’s Concertino da Camera and has since gone on to perform many others including Henri Tomasi’s Concerto for Saxophone, the Tomasi Ballade and Glazunov’s Concerto for Saxophone. Alongside her solo appearances Victoria is also an active chamber musician and has worked with a wide range of ensembles including the Bournemouth Symphony Orchestra, the London Sinfonietta Academy 2014, the London Philharmonic Orchestra (Future Firsts Scheme) and the London Electronic Orchestra. She recently performed in the BBC Proms as a member of the Multi Story Orchestra in Steve Reich’s much acclaimed Music for a Large Ensemble. Victoria is the soprano player in the Oracle sax quartet who have performed at events such as the Royal Variety  Show party and the Pride of Britain Awards. She is also the Tenor player in the award winning Borealis quartet who’s main emphasis is on contemporary music. The group  regularly commission new works from up and coming composers. Victoria has performed at many prestigious venues including Royal Albert Hall – Elgar room, Cadogon Hall, the V&A Museum, the National Portrait Gallery, St Johns Smith Square and the Southbank Centre.

Tom Gimson – Baritone Saxophone. Tom is a London based composer and saxophonist. He is graduate and former fellow of the Guildhall School, having studied with John Harle, Christian Forshaw and Laurence Crane. Tom collaborates and performs with a wide variety of projects and ensembles including his own group Masque Collective. As a composer, Tom works within both acoustic and electronic music production, often devising works as an exploration of rhythmic ambiguity. He draws on a range of influences across populist and contemporary music, taking inspiration from producers such as Flying Lotus, Justin Vernon and Apex Twin, as well as classical composers such as Sibelius, Martland and Reich. He is currently working on several collaborative projects with the theatre ensemble Trah and Chips, as well as multiple new commissions, including a piece for Ensemble Bash to be premiered in 2019. His active interest in contemporary music has led him to perform in Milton Court; the Wigmore Hall; Tête a Tête opera festival; the London Jazz festival; BBC Radio 3’s Total Immersion series; Steve Reich’s 80th birthday weekend at the Barbican; and appeared as a soloist in the Barbican Concert Hall, performing Mark-Anthony Turnage’s Two Memorials. When not engaged musically, Tom works as a photographer, camera assistant and retoucher, and is currently working on several projects to combine the two spheres of visual and sonic media within his own work.