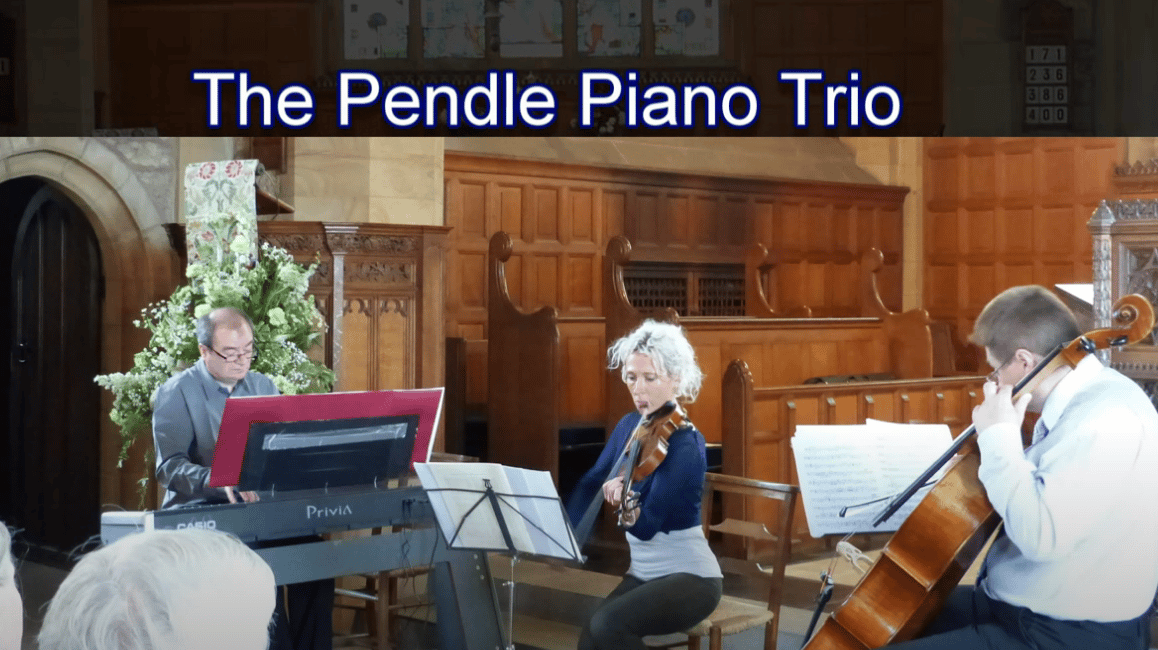 Gaynor Sutcliffe (violin). After leaving CRGS (Clitheroe Royal Grammar School), Gaynor studied violin and piano at the RNCM (Royal Northern College of Music), then played with prestigious orchestras and ensembles such as the Halle and BBC Philharmonic. She then joined the internationally acclaimed Swing Commanders and toured Europe and the USA for ten years as multi instrumentalist (violin, piano, saxophone & accordion), vocalist and dancer. Her string quartet, trio and duo perform regularly for corporate functions and weddings and as a soloist she has recorded with Bonner Tiler, Richard Hawley and Alex Jones as well as performing in front of Prince (now King) Charles and the late Queen Elizabeth. As a soloist, Gaynor performs any genre and can take any request, as her experience ranges from folk, classical, jazz, pop, world music to swing etc. For many years, Gaynor was the promoter of the Knowle Green lunch-time concerts.

Paul Greenhalgh (piano). Born in Lancashire in 1958, Paul has a BMus degree from Cardiff University, followed by two post-graduate years at the Royal Welsh College of Music and Drama, studying piano with Martin Jones and Geoffrey Buckley and more recently with Martin Roscoe. Whilst at Cardiff, he was awarded the Harlech Television Prize and the Morfydd Owen Prize. Paul is also a recipient of the prestigious Sheila Mossman Award given by the ABRSM to the candidate gaining the highest marks in grade eight. Paul also holds piano performance diplomas from all the main UK examining boards. He appears regularly as recitalist, concerto soloist and accompanist at venues throughout the North West. He is Principal of the Blackburn School of Music and teaches piano at Stonyhurst College. Paul is a sought after accompanist and recent exam successes include DipABRSM in clarinet and ATCL in singing and cello.

Robert Buller (cello). After leaving CRGS he studied violincello at the Royal Northern College of Music with Emma Ferrand. He plays for many local orchestras and choral societies in Lancashire, North Yorkshire and Greater Manchester including principal cello for the Promenade Concert Orchestra and Settle Orchestral Society as well as principal double bass for the Piccadilly Symphony Orchestra. Robert regularly performs as a soloist and chamber musician with various ensembles including the Pennine Piano Trio, the Eversley String Quartet and the Eberle String Trio. Outside the classical sphere, Robert has played double bass with the Three Musikateers (gypsy jazz / bluegrass), FUGA (Argentinian tango quartet) and performs and records occasionally with local singer songwriters. He recently took over as concert organiser for the Society and is also a freelance IT consultant.