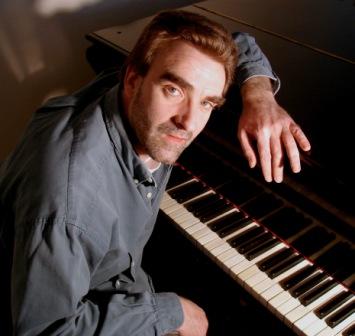 Jonathan Plowright was born in Yorkshire and educated locally at Stonyhurst College. He was a gold medallist at The Royal Academy of Music, London, where his professor was Alexander Kelly (pianist). He was also a recipient of a Fulbright Scholarship to study at the Peabody Conservatory in Baltimore with Julio Esteban. Plowright won the Baltimore Symphony Orchestra Award and the European Piano Competition. His USA debut was at Carnegie Hall in 1984. His UK debut followed in 1985, at Wigmore Hall. Plowright performed worldwide as recitalist, appeared with leading orchestras and ensembles, made many commercial recordings and appeared on radio and TV broadcasts. He championed neglected music from Polish Romantic composers, Stojowski, Paderewski and Melcer, which he has recorded for Hyperion Records. He made the premiere recording of the collaborative suite Homage to Paderewski. As of 2012 he was Professor at the Royal Scottish Academy of Music & Drama and Head of Keyboard at the University of Chichester. He offers masterclasses, consultation lessons and prize adjudications.

Hailed by reviewers as “a colossal musical mind” with a “transcendent technique”, Jonathan is recognised globally as a truly exceptional pianist. Gold Medallist at the Royal Academy of Music and a Fulbright Scholar, prizewinner in many competitions, Jonathan also won the Gold Medal at the Royal Overseas League Competition as well as first prize at the European Piano Competition. Critics, colleagues and audiences alike have since had unanimous praise for his many national and international performances and he has been in demand all over the world as recitalist, appeared with leading orchestras and ensembles and given numerous radio broadcasts. He has a hugely successful string of recordings on the Hyperion and BIS labels all of which have been enthusiastically received with outstanding reviews in the worldwide media.

To visit Jonathan’s website click here.   To illustrate his versatility click here to hear him play “Boogie Woogie Etude” (1943), composed by 20th century American composer Morton Gould, which was recorded live during his recital at the Wigmore Hall, on 15th November 2008.

Post Scriptum
Jonathan rounded off his recital by playing Morton Gould‘s Boogie Woogie Etude as an encore.
After an initial startled reaction, this brought the house down.