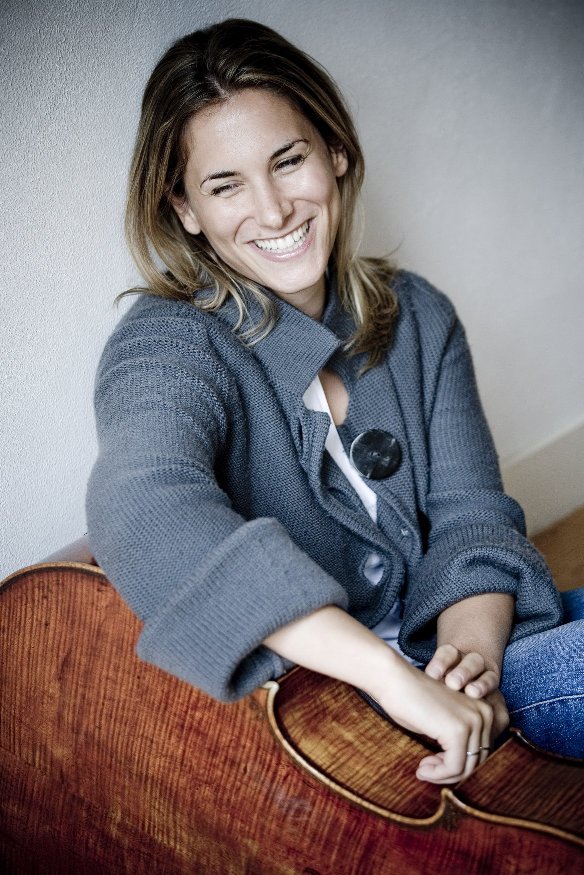 Gemma Rosefield last played for us  in June 2006 when, with doors open on a lovely summer evening,  a blackbird accompanied her playing. Her official accompanist on that occasion was Simon Lepper. Winner of the prestigious Pierre Fournier Award at Wigmore Hall in 2007, Gemma  made her concerto debut at age 16, when she won First Prize in the European Music for Youth Competition in Oslo, Norway, playing a televised performance of the Saint-Saens Concerto with the Norwegian Radio Symphony Orchestra. Other successes include Kirckman and Making Music Awards, First Prize in the Royal Over-Seas League String. Gemma has completed her studies with Ralph Kirshbaum at the Royal Northern College of Music, where she was awarded the coveted Gold Medal. She had previously graduated with First Class Honours at the Royal Academy of Music as a pupil of David Strange, where she won numerous prizes including the Vice-Principal’s Special Prize. She has also studied with Johannes Goritzki, Gary Hoffman, Bernard Greenhouse and Zara Nelsova, and has participated in Masterclasses with Frans Helmerson, Steven Isserlis and Yo-Yo Ma. She was selected to take part in a series of 10 Public Masterclasses with Gary Hoffman at the Paris Conservatoire – “Les Dix Stages de Perfectionnement”. Gemma has performed with eminent musicians such as Gyorgy Pauk, Menachem Pressler and Stephen Kovacevich, with whom she played last summer at Dartington.

Described by The Strad on her 2003 Wigmore Hall Debut as “a mesmerising musical treasure”, by the London Evening Standard in 2005 as “a phenomenal talent”, and featured in the BBC Music Magazine as “one to watch” in 2007, Gemma made her solo debut in the Concertgebouw, Amsterdam and in the Diligentia, The Hague in the New Masters International Recital Series. She performed last year in Kenya, with the Nairobi Symphony Orchestra, and whilst there she gave several highly successful Public Masterclasses. Gemma has a deep interest in contemporary music, and works have been written for her by David Matthews, Cecilia McDowall, James Francis Brown, Rhian Samuel, David Knotts, Julian Dawes, Benjamin Wolf, Norman Rosenberg and Michael Kamen. She has recently recorded CD’s of the works of Rhian Samuel, James Francis Brown, and Julian Dawes. Stringendo Magazine of Australia has described ‘her lyrical, cantabile playing’ in a previous recording as ‘truly magical. She soars, she floats, she is operatic, she makes you weep.’ Gemma gave the highly successful Pierre Fournier Award Recital in September 2008 at Wigmore Hall, and also the 2008 and 2009 Jacqueline du Pre Memorial Concerts at the same venue. In the 2009 Concert, she and pianist Michael Dussek were joined by Leoš Čepický, Leader of the Wihan Quartet, with whom they subsequently appeared at the Belfast Festival, a concert broadcast on BBC Radio 3. To see and hear her play with these two artists the following year click here, from where you may also explore the rest of her website. Gemma has recently performed, also on Radio 3, Michael Ellison’s Concerto for Cello, Turkish Instruments and Orchestra with the BBC Symphony Orchestra. Following a Wigmore Hall Sunday Morning Coffee Concert with Ashley Wass in April 2009, Gemma played a very well-received ten concert series in Japan, and has just returned from giving six concerts in Mexico, one televised live, with Morgan Szymanski, her cello/guitar duo partner, and Machaca, their Latin American group.

Future plans include solo recitals and concertos at festivals and venues throughout the UK and Europe, together with performances with Machaca, the Čepický, Rosefield, Dussek Piano Trio, and with the prize-winning Fidelio Piano Quartet. Gemma will also be appearing at La Linea Festival at the Southbank with Morgan Szymanski. In Europe, she will be playing in Belgium (Brussels), the Czech Republic (Prague), France (Orpheus and Bacchus Festival, Bordeaux, Obernai Festival and Strasbourg), Italy (La Mortella Festival, Ischia) and in Sweden.

Performances by Benjamin Nabarro have taken him throughout Europe, North America, Africa, and the Far and Middle East. As a soloist, director and guest concertmaster Benjamin Nabarro has appeared with groups such as the English Chamber Orchestra, Philharmonia and BBC Symphony Orchestra, among others. In 2009 he was appointed first violinist of Ensemble 360. Formed in 2005 to take up residency in South Yorkshire with Music in the Round, Ensemble 360 brings together eleven world-class musicians to form one versatile group; five string players, five wind players and a pianist. Benjamin Nabarro also plays regularly with the Nash Ensemble, and has appeared at the BBC proms as well as venues world-wide. He is violinist of the recently formed Leonore Piano Trio with pianist Tim Horton and cellist Gemma Rosefield. As a recording artist he can be heard on the Hyperion and Dutton labels, among others.

Born in Nottingham, UK he attended Chetham’s School of Music in Manchester before studying at the Royal Academy of Music with Erich Gruenberg, and later in Chicago with Shmuel Ashkenasi. Future projects include a tour of New Zealand with the Leonore trio, invitations to the festivals of Mecklenburg-Vorpommern and Nürnberg, and London engagements including performances of concerti by Mozart, Glazunov and Brahms.

“Purity of style, elegance of phrasing and … unsurpassed perfection of technique”, “an outstanding artist” Musical Opinion

To see and hear both Benjamin and Gemma playing as part of a larger ensemble click here, from where you may also explore the rest of his website.

Mozart ~ Duo for violin and Cello in G major

Ravel ~ Duo for violin and cello

Mozart ~ Duo for violin and cello in Bb major