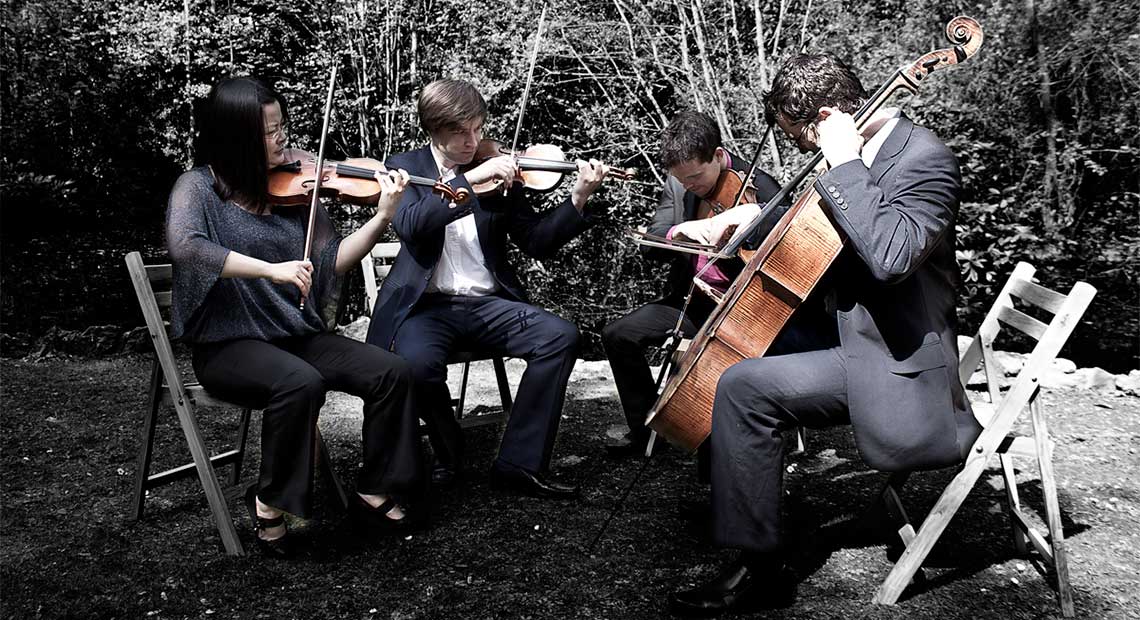 The Wu Quartet performs regularly across the UK and the Continent, having given concerts at the Wigmore Hall and Purcell Room in London, Music in the Round in Sheffield, the Arnold Schoenberg Centre in Vienna, the International Concert Hall in Beijing, Santa Croce in Florence, the William Walton Foundation in Ischia, Snape Maltings, the BBC Proms, Bridgewater Hall and at many music societies. May 2014 saw the release of their first recording of the Mendelssohn Fugues – part of the collaborative CD of the Complete Mendelssohn Works for String Quartet on the Champs Hill label along with the Benyounes, Idomeneo, Sacconi, Navarra, Castalian, Piatti, Badke, Artea, and Cavaleri String Quartets.

The quartet has had a number of significant competition successes: 1st prize-winners at the 23rd V.E. Rimbotti International string quartet competition in Fiesole, Italy in 2012, the Wu Quartet has also received the 2011 Artis Quartet prize in Vienna and the 2nd and Baerenreiter prizes at the 2012 Charles Hennen Concours in Holland. In September 2011 the quartet reached the semi-finals of the Beijing International String Quartet Competition.  Recently they have been named recipients of the Albert and Eugenie Frost prize from the Royal Philharmonic Society.  The quartet has also received awards from the Hattori Foundation and the Musicians Benevolent Fund and in 2010 was selected for the Park Lane Group Young Artists scheme as well as winning the MMSF/Philharmonia Orchestra Ensemble Award. In 2011 the Wu quartet joined the European Chamber Music Academy, which has given it the opportunity to study at conservatoires around Europe with some of the world’s finest chamber musicians.  In 2013/2014 the quartet continues its participation in the ECMA and is now being mentored personally by its founder, Hatto Beyerle (Alban Berg Quartet) with whom they work regularly with in Germany.  In the UK they work closely with Simon Rowland-Jones. They have also attended IMS Prussia Cove and as part of its 40th anniversary celebrations performed in the Wigmore Hall.  They have also studied with Johannes Meissl (Artis Quartet) and Peter Cropper (Lindsay Quartet) and in 2012 we invited to take part in the Royal Northern College of Music’s International Artist Diploma course. Highlights for 2014/2015 include a return to the Wigmore Hall, tours of England, Scotland, Wales and the Channel Islands, an appearance in the Salisbury International Music Festival and quintet concerts with Leslie Howard.

Qian Wu was born in China and began violin lessons at the age of seven, going on to study for several years at the Shanghai Conservatoire and give many recitals around China during her childhood. In 2000 she came to study at Chetham’s School of Music. During her time at Chetham’s she gave a concerto performance with the Royal Liverpool Philharmonic Orchestra and also payed with the Halle Orchestra, as well as giving many solo and chamber music recitals around Europe and the UK. From 2004 Qian studied for six years under a full scholarship at the Royal Academy of Music with Gyorgy Pauk, performing in masterclasses with Isaac Stern, Gil Shaham, Salvatore Accardo, Maxim Vengerov and Mauricio Fuks and playing under many famous conductors, including Sir. Colin Davis, Sir. Mark Elder, Valery Gergiev, Daniel Harding and Kristjan Jarvi. In 2010, Qian graduated with distinction in her MMus degree and was awarded the prestigious DipRAM.

Edward Brenton completed his undergraduate studies at the Royal Academy of Music, London, where he studied with Professor Erich Gruenberg. Since graduating he has twice attended the solo classes at the International Musicians Seminar, Prussia Cove and has received coaching from Zvi Zeitlin, Sylvia Rosenberg, Mats Lidstrom, Matthew Trusler, Hartmut Rhode, Michael Dussek and members of the Skampa and former Amadeus and Alberni String Quartets. He enjoys a varied career and has worked extensively with orchestras throughout the UK and abroad, including playing assistant concert master in the European Union Chamber Orchestra, with whom he has toured all over Europe and South America, as well as making appearances with the Northern Sinfonia and Hallé. He has given many recitals in the UK, including performances of concerti by Bruch, Vivaldi and Vaughan Williams.

Matthew Kettle gained a First Class BMus Degree at the Guildhall School of Music and Drama, London where he studied with Mark Knight. Upon graduating from the Guildhall in July 2008, Matthew was awarded a full scholarship to attend the Manhattan School of Music, New York to study for an Artist Diploma.  He continued his studies on a private basis with Daniel Avshalomov (American String Quartet) in New York and Garth Knox (former Arditti Quartet) in Paris. The recipient of various awards, Matthew has received a silver medal from the Worshipful Company of Musicians and the bronze medal at the Marlow Concerto Competition. As a solo and chamber musician Matthew has given recitals across the UK at venues including Wigmore Hall, Purcell Room, St Martin’s in the Fields, Adrian Boult Hall, Birmingham; Snape Matlings and Kings Place, London. He has also given recitals in China, Italy, France and Austria. During his musical career, he has had the opportunity to participate in masterclasses with many eminent musicians including Michael Tree, Thomas Riebl, Lawrence Power and Bernard Greenhouse as well as working under many eminent conductors including Sir Simon Rattle, Sir Colin Davis, Yan Pascal Tortelier, Sir Andrew Davis and Marin Alsop. Regularly performing with many British orchestras, Matthew has received national recognition as viola player in the Theseus Ensemble which is devoted to contemporary repertoire. He has appeared live on BBC Radio 3 and on BBC Radio 1.

Joe Zeitlin started the cello at the age of nine. He obtained music scholarships to Wells Cathedral School, The Purcell School and The Royal Academy of Music. A keen chamber music player, Joe has performed at St John Smith’s Square, St James’ Picadilly, on a recent NAXOS recording, as well as working professionally with the LSO and Philharmonia. Graduating from the Academy with a first class honors B.Mus. in 2005 under David Strange, he then achieved a DipRAM award in his Post-graduate Diploma under Colin Carr and Felix Schmidt. During this time he won the May Muckle cello competition, reached the final of the RAM club prize, and won the Moir Carnegie award for the best post-graduate final recital. He also studied improvisation under Neil Hyde of the Kreutzer quartet. Joe recently gave a performance of Haydn’s cello concerto in C major with the Norwich Mozart Orchestra. He has taken part in masterclasses with Steven Isserlis, Gary Hoffman and Steven Doane. His passion for pushing boundaries in contemporary music has taken him into many other different areas of sound and music, both as a performer, composer and improviser. Merging the cello with computers and electronics has seen him play concerts across the world in Peru, Germany, Spain and England.