Please note this new date. Miss Dariescu was booked to perform on the 25th March but now has to be in Romania
on that date to receive her country’s highest award from King Michael and the Romanian Government. 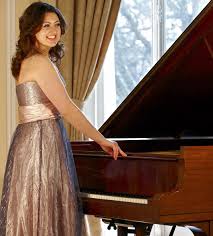 Alexandra Dariescu is an outstanding ambassador for classical music. In 2013 Alexandra gave her debut at the Royal Albert Hall with the Royal Philharmonic Orchestra and became the first ever Romanian female pianist to performing this prestigious hall. Alexandra won the Women of the Future Award in the Arts and Culture category in 2013 and has released two CDs on Champs Hill Records to critical acclaim.

Named BBC Music Magazine ‘Rising Star’, Alexandra Dariescu made her debut at the Carnegie Hall in New York, where she joined András Schiff during his “Perspectives” residency. Selected by Young Classical Artists Trust (YCAT) in 2008, Alexandra was a Laureate at the Verbier Festival Academy in Switzerland where she won the Verbier CUBS Prize. She went on to win the Guildhall Wigmore Prize and the Romanian Ambassador‘s award for her outstanding contribution to promoting Romania’s image in the UK, as well as the Prix Maurice Ravel in France. Alexandra is the first pianist to be mentored by Imogen Cooper through the Royal Philharmonic Society/YCAT Philip Langridge Mentoring Scheme.

NEWS: After successful debuts with the Halle, Royal Northern Sinfonia & Bournemouth Symphony Orchestra last season, Alexandra has just been selected by the International Piano Magazine as one of  30 top pianists under 30 who are likely to dominate the world stage in the years to come. Each has achieved the impossible dream: a combination of technical excellence and a passion for pianism strong enough to base a career on.”

She is widely recognised as the outstanding romantic pianist of her generation. Indeed, at our last Summer Concert (June 2014), composer Robin Stevens actually commented to Tony Cooper, our Chairman, “How on earth have you managed to engage her”, almost with a note of incredulity in his voice.