All Winter Season Concerts are held in the Lecture Theatre at Clitheroe Royal Grammar School Sixth Form Centre, York Street, Clitheroe, BB7 2DJ, Grid Reference SD745421. Entry is via the double doors which face you as you come in via the York Street gates.  Car parking is free in the school yard; please use the marked bays. There is level access and facilities for the disabled. The CRGS Sixth Form Centre is marked by a red arrow on the map. 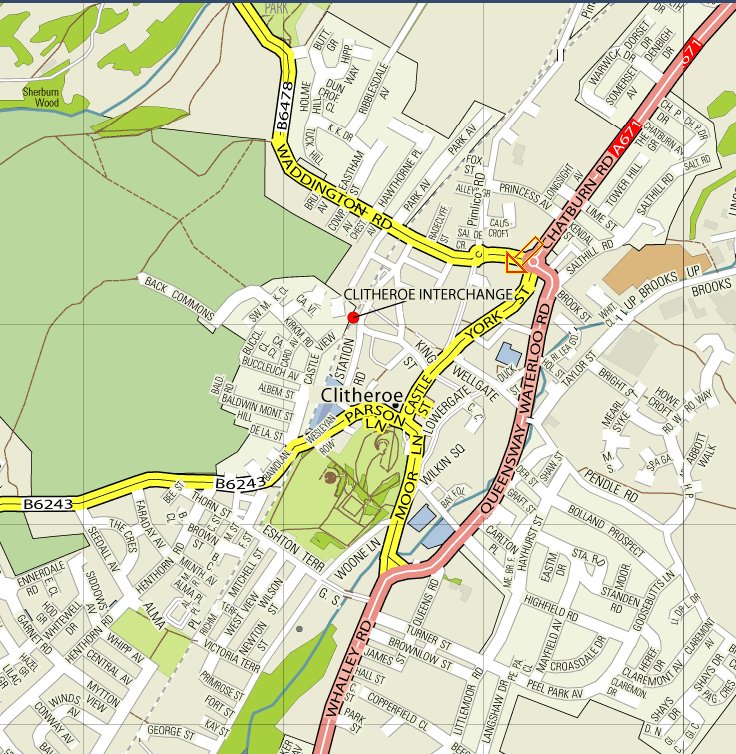 ON FOOT FROM RAILWAY STATION AND BUS STATION
Together, the bus and railway stations form the Clitheroe Interchange. Click here for train times on the Manchester Victoria to Clitheroe route (and many others) and here for bus timetables.

At this point, cross Railway View Road and go up the broad alleyway which runs between the back of Dawson’s Department Store and the Health Centre. Cross Railway View Avenue and continue, keeping first the car park and then the Ribble Valley Borough Council Offices on your left. Go through the ‘White Lion‘ archway to emerge at the bottom of Church Street. Cross the road and go down the steps in front of the Library. Turn left onto York Street then follow ‘All Routes from Clitheroe Library’ shown below. The total distance from Clitheroe Interchange to the school is about ½ mile, 10 minutes walk.

BY ROAD FROM MANCHESTERStarting from M60/M62 J18 go north on the M66 and onto the non-motorway continuation A56 Edenfield by-pass. After dropping down a long hill, fork left onto the Haslingden by-pass, still A56 signed Blackburn and Clitheroe. At the roundabout take the second exit onto the Accrington Easterly by-pass, still A56. At the bottom of a long hill go straight forward at the roundabout, under the M65 and onto the A6068. After descending again, go straight ahead at the traffic lights and turn left at the second set of lights onto the A671 towards Whalley and Clitheroe, via Read. Bear right at the next traffic lights and straight on at a further set to reach the Bramley Mead roundabout where you turn right onto the A59 dual carriageway. From here continue as from M6/Preston, below.

BY ROAD FROM M6 & PRESTON
From M6 J31 take the A59 signed Blackburn and Clitheroe. After just under 1½ miles you will see the Samlesbury Hotel on your left.  Fork left at the traffic lights here, signed Clitheroe and BAE Systems. Go past the large BAE  factory on your right and, at each of three following roundabouts, take the first exit, (i.e. keep straight ahead). The first is at Mellor (other exit to Mellor village), the second is a very large one at Langho (other exits here to Whalley and Blackburn) and the third is at Bramley Mead (other exit here to Accrington and Burnley). Continue on what is now a dual carriageway, under a road bridge and straight on at a further roundabout, with McDonald’s on the left. After ½ mile turn left at the next roundabout onto the A671, signed Clitheroe. Follow this road into the town. Just under 1 mile after the town boundary and 30 mph sign there is a mini roundabout. Bear Slightly left to keep straight on, with Sainsbury’s supermarket on your right, then straight on at the next mini roundabout and up Moor Lane (one way street with shops).  At the top of the hill, with Clitheroe Castle gates on your left, swing right onto Castle St.,. As you go down the hill, you will see Clitheroe Library ahead of you; follow ‘All Routes from Clitheroe Library’, shown below.

BY ROAD FROM LONGRIDGE
Follow the B6243 via Hurst Green. At the first mini roundabout after entering the town (straight ahead being one-way) you must turn left onto Station Road, go past Booth’s supermarket and on reaching the next mini roundabout (with the Platform gallery on your left and Dawson’s department store facing you) turn right into King Street. Ignore the first left turn and go up the hill (with Byrne’s wine merchants on your left and the Post Office on your right). At the top of the hlll turn left to see Clitheroe Library facing you; follow ‘All Routes from Clitheroe Library’, shown below.

BY ROAD FROM SKIPTON & NORTH YORKSHIRE
Travelling SW along the A59, ignore the right turn for Chatburn. Continue up the hill and go first under a railway bridge and then a high road bridge in a deep cutting. Just over 1¼ miles after going under the road bridge, turn right at the wide road junction marked Pimlico Industrial Estate and Clitheroe North – A671. Ignore the first two left turns (which lead to industrial estates). After ¾ mile turn left at the roundabout onto Chatburn Road. Go past CRGS Main School on your left, then turn right at the roundabout by a BP filling station onto Wellgate (Marked B6478 on the smaller map). One entrance to CRGS Sixth Form Centre is now on your left. At night this entrance is closed so, carry on to the next roundabout and turn left onto Church Brow (one-way). This climbs steeply to Clitheroe Parish Church on the right at the top of the hill,  and then down Church Street (passing the Ribble Valley Council Chamber on the right, where we hold our Summer Concert) to Clitheroe Library on the left. Here turn sharp left onto York Street and follow ‘All Routes from Clitheroe Library’ shown below.

ALL ROUTES from CLITHEROE LIBRARY
Keeping the Library on your left, go down York Street (one way). CRGS Sixth Form Centre is on the left in about 250 metres,  just after a row of houses and bounded by a low wall topped by metal railings. There is a single gate for pedestrian use and just past this a pair of double gates. (These gates are normally for exit only so, If arriving before 5pm, motorists should proceed to the roundabout at the end of York Street, turn left into Well Terrace and enter by the double gates about 100 metres on the left).  After 5pm motorists may enter via the York Street gates (the Well Terrace gates may be shut). The entrance to the Lecture Theatre is via the double doors immediately opposite the York Street gates.

LEAVING THE SCHOOL AFTER THE CONCERT
Because of the one-way system, motorists must turn left onto York Street. At the roundabout turn left into Well Terrace (B6478) for Longridge, keep straight on up Chatburn Road (A671) for Skipton and North Yorkshire or turn right onto Waterloo Road (A671) for Accrington, Blackburn, Burnley, Manchester, Preston and the M6.