Due to the closure of the CRGS Sixth Form Centre for the Easter holidays, this concert will take place at
The Grand, York St., Clitheroe, BB7 2DL 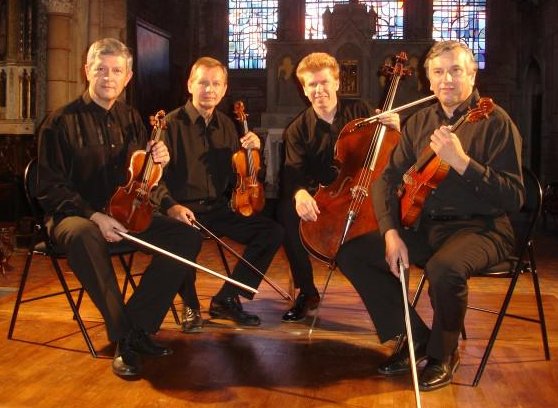 The Prazak Quartet—one of today´s leading international chamber music ensembles—was established in 1972 while its members were students at the Prague Conservatory. Since then, the quartet has gained attention for its place in the unique Czech quartet tradition, and its musical virtuosity.

The 1974 Czech Music Year saw the Prazak Quartet receive the first prize at the Prague Conservatory Chamber Music Competition. Within twelve months their international career had been launched with a performance at the 1975 Prague Spring Music Festival. In 1978 the quartet took the first prize at the Evian String Quartet Competition as well as a special prize awarded by Radio France for the best recording during the competition. Further prizes were awarded at various other Czech competitions.

For over 30 years, the Prazak Quartet has been at home on music stages worldwide. They are regular guests in the major European musical capitals—Prague, Paris, Amsterdam, Brussels, Milan, Madrid, London, Berlin, Munich, etc.—and have been invited to participate at numerous international festivals, where they have collaborated with such artists as Menahem Pressler, Jon Nakamatsu, Cynthia Phelps, Roberto Diaz, Josef Suk, and Sharon Kam.

The Prazak Quartet records exclusively for Praga/Harmonia Mundi which, to date, has released over 30 award-winning CDs. In addition to numerous radio recordings in France, Germany, the Netherlands, and the Czech Republic, the Prazak Quartet has also made recordings for Supraphon, Panton, Orfeo, Ottavo, Bonton, and Nuova Era.

In 2010 Pavel Hula succeeded founding first violinist Vaclav Remes, who was unable to continue performing due to a medical condition in his left hand. Pavel Hula was the longtime first violinist with the Czech-based Kocian Quartet, and has been a close friend of the Prazak Quartet for many years.

To visit the Prazak Quartet website click here. On their website click on ‘Videogallery’ and then on “Videa na YouTube.com” which will open a number of files where you may see and hear them play – unfortunately they do not include any of the items they are to play for us. However, the Smetana No.2 is thoroughly recommended as an example of them playing music from their homeland. There are also extracts from two Dvorak quartets.